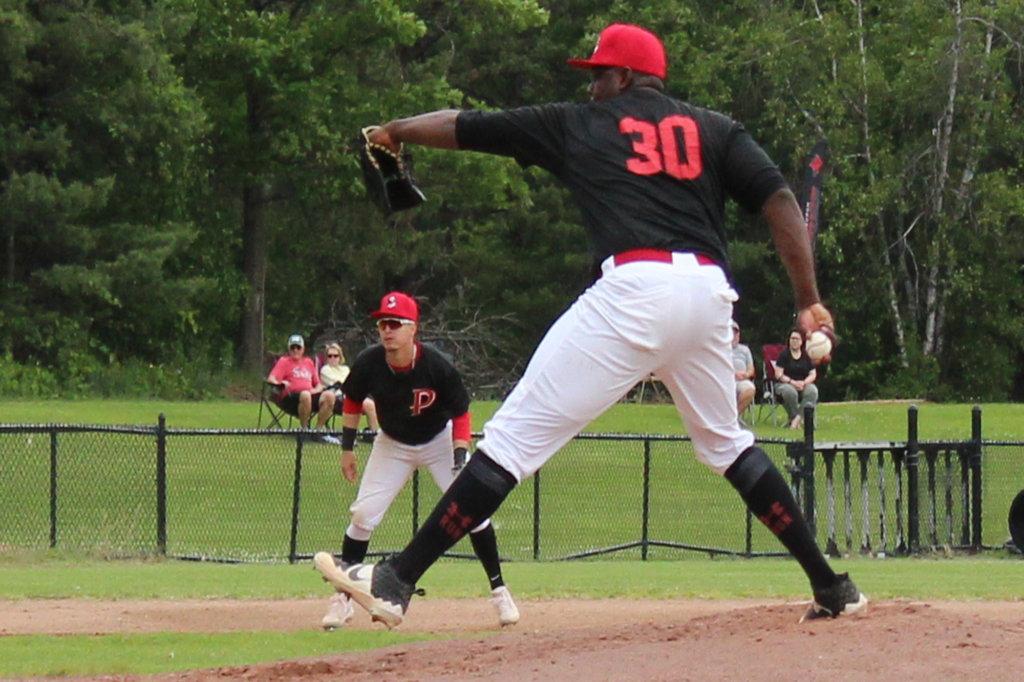 SARANAC LAKE, NY  –  There was no shortage of offensive firepower throughout the three game set between the Saranac Lake Surge and the Plattsburgh Thunderbirds. Both teams combined to score a total of 66 runs throughout all three games.

Game one was a rout by the Thunderbirds, who put up 20 runs against Surge pitching. Surge starter, Shawn McFeggan gave up 13 runs in four innings of work on seven hits and seven walks. Ryan Evans and Mark Berryman combined to allow seven more runs in relief over two innings before handing the game to outfielder Johampher Arrendol who closed out the game for the Surge.

The pitching for Plattsburgh was not something to write home about either. Thunderbirds starter Andrew Kneussle gave up eight runs, six earned, in only two innings pitched. In those two innings, he gave up six hits and two walks. Fortunately for the Thunderbirds, the relief of Andrew Bielicky and Rancys Nunez combined for five innings of shutout baseball.

Marcos Estevez had the strongest day between the two teams, going 4-4 with a double, a triple, two runs scored and five RBIs. AJ Pollack also produced for Plattsburgh, going 2-3 with two doubles, four runs scored and four RBIs in the 20-8 win.

In game two, the Surge flipped the script, holding the Plattsburgh offense to just three runs, while also scoring 13 of their own. All three pitchers that entered for Plattsburgh allowed at least three runs to score. Keyvan Grenald the starter who was credited with the loss, went four innings, allowing five runs on five hits and four walks. Relievers Kendri Salvador and Rancys Nunez allowed eight runs combined over only two innings of work.

For the Surge, starter Jay Palais had a strong quality start en route to the win. Palais went 6.0 innings, allowing one run on four hits and four walks while striking out five batters. Jordan Rhodes entered in the seventh to close out the game, and allowed two runs to score.

Once again, Marcos Estevez was a big part of Plattsburgh’s offense going 2-3 with an RBI. Saranac’s offense came from the top three spots in their batting order as each of them had two or more RBIs. Cory Alexander led off and went 2-3 with three runs and four RBIs, Ben Gravel followed him with a 1-4 day with three RBIs, and Yordi Francisco went 1-5 with two RBIs and two stolen bases.

But, in game three, the Plattsburgh offense came alive once again, demolishing the Surge 19-3, making this one of if not the only series to never have a full nine inning game. Brelin Dixon had a solid start, going five innings, allowing three runs on two hits and four walks while striking out six batters. He was relieved by catcher Jake Sisto and reliever David Ortiz who combined to give the Thunderbirds two shut out innings.

For the Surge, Mark Berryman got the start and got jumped by the Thunderbird’s offense. In four innings, Berryman allowed 10 runs, on six hits and eight walks. Infielder Yordi Francisco gave the Surge a scoreless inning before Steven Adamson allowed six runs in 0.2 innings pitched.

To go along with his masterful shut out inning on the mound, Jake Sisto also had an offensive explosion at the plate. Sisto went 2-2 with a double, two runs scored and six RBIs. Ben Gravel had a solid day for the Surge, going 1-3 with a run scored.

With the series win, the Thunderbirds stay in stride with the Tupper Lake Riverpigs as they head into a series versus them that could shake up the top of the league standings. Meanwhile, the Surge will host the Japan Islanders who are also coming off of a series loss.